A microprocessor is a programmable set of integrated circuits, they are the reason the computers nowadays are compact, consume less power, faster, highly reliable, generate
less heat. So, lets look at the microprocessor that started it all the Intel 4004.

Early computers (2nd gen) used transistors from as early as 1940s, but the drawbacks were it took up a large amount of space, and required a cooling system and were costly
and not versatile. By the end of the 60s engineers found a way to combine multiple transistor into a single IC. Although this reduced the size of the computers compared to
the earlier ones. They still needed numerous chips to function.

The use of MOS(metal-oxide semiconductor) ICs in computers paved the way for the first microprocessor. At first the MOS transistors were slower and unreliable compared to their
bi-polar counterparts. Hence they were used to design computers only when performance was not the top priority. The first computer designed using the MOS technology was the
24-bit general-purpose computer D2000 used for aviation and navigation. It was very compatible , and was used for guidance on the Poseidon submarine-launched missile.

In the late 1960s a Massachusetts-based start-up called Viatron Computer Systems announced its System 21, a 16-bit minicomputer built from MOS chips. The
System 21 was aimed, among others, at applications such as mathematical and statistical analysis, business data processing, data entry and media conversion, and
educational/classroom use. Viatron introduced the term "microprocessor" in 1968, although they were referring to their 2101 terminal and not a chip as we know it. It was a
terminal which was made of 18 MOS chips on three separate boards.

In 1971, BusiCom, a Japanese calculator maker partnered with Intel, an American semiconductor company to design a multi-chip calculator. The 4004, created by Federico
Faggin who led the project from its beginning to completion. Marcian Hoff formulated and led the architectural proposal in 1969, and Masatoshi Shima contributed to the architecture
and later to the logic design. The end result was a 4-bit wide single chip CPU and the first micro-processor Intel 4004. The BusiCom calculator 141-PF came out soon after. The Intel
4004 microprocessor was also used in the first microprocessor-controlled pinball game, a prototype produced by Dave Nutting Associates for Bally in 1974. 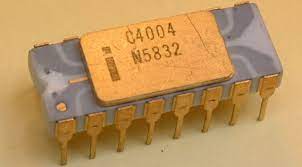 The 4004 marked the start of the dominance of Intel in the semiconductor industry and was the most advanced IC in its time.

Written by  K Sriram
on December 6th, 2021
Previous Post: What Is A Zero-day Vulnerability?
By  Shreya Chandra
September 29th, 2021
An interesting dive into the what's, when's and how's of Zero Day Vulnerabilities
Next Up: Mumbai Dabbawalas
By  Suhas Reddy and Raj Raushan Singh
March 30th, 2022
125 years old system that feeds Mumbai